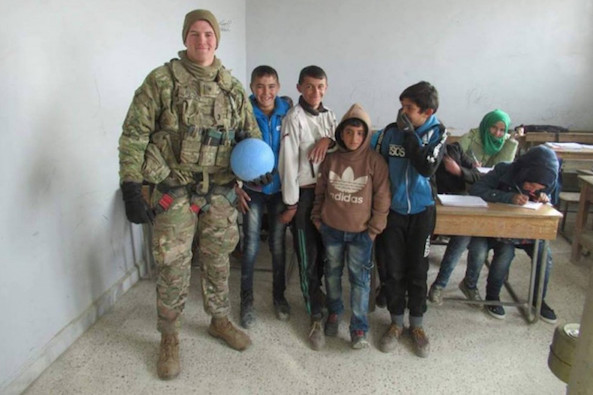 Raising One World Futbols for kids in the Middle East [...]

While my brother, Masen, a US Soldier, was deployed to the Middle East, he had limited contact with me and my family, but the re-occuring theme throughout our conversations was that the hundreds of kids he and his unit encountered on a daily basis absolutely love playing soccer.

However, these kids do not have soccer balls. Instead, the kids have use whatever is at hand to fashion a pseudo ball. My brother messaged me and asked if I could send a few soccer balls to him to give to the kids. I thought about going to Walmart or Academy to buy a few, but I realized these soccer balls would last less than a week on rough, desert terrain.

So I began doing research and found a company called One World Play Project. They are an organization that produces highly-durable soccer balls. Their mission is very much in line with my mission for this campaign, "We created an unpoppable ball to bring the transformative power of play to the hundreds of millions of youth who don’t even have something as simple as a ball...Play is in our DNA...it heals and rebuilds communities devastated by war, disaster, disease and poverty".

While Masen was deployed in Syria, we sent 55 One World Futbols. My sister, Cadyn, is currently deployed in Saudi Arabia. We know there is so much more play we can deliver. Now, we are raising balls for Masen, Cadyn and those in their squadrons to give to kids in need. Our goal is to raise at least 100 more balls.

Help us send balls, not bombs to the kids of the Middle East.

Through the Give Balls program, you can buy a One World Futbol for $28 USD that will bring play to youth in the Middle East.